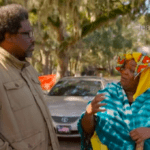 Including Gadsden’s Wharf and McLeod Plantation

From the first episode, in which Kamau, an African-American man, attended a KKK cross burning (or “cross lighting,” as they corrected him) to learn about the group and their rationale for their bigotry, the show has shed a light on some of our country’s most deep-seated problems. It makes for some powerful television. Fortunately, Bell’s background as a comedian can bring some much needed levity — his affable personality lets him be comforting to those who have faced hardships and allows him to be restrained enough to calmly talk with some of the nation’s worst bigots, like white nationalist Richard Spencer.

On Sun. May 13, CNN will air an episode of United Shades of America that focuses on the experiences of the Gullah Geechee people in South Carolina. Kamau travels to the Gullah Heritage Festival on St. Helena Island where he learns about the unique culture of the Gullah Geechee, including their music, art, food, and language, from local members of the community.

In the episode he also travels to local landmarks, like the Angel Oak, the Penn Center, the Charleston City Market, Gadsden’s Wharf (the future location of the International African-American Museum), and McLeod Plantation Historic Site to learn about the history of Gullah culture and enslaved men and women. A particularly powerful moment comes as Kamau stands in the slave quarters at McLeod Plantation and a historian describes the realities of slavery. The episode remains hopeful, celebrating Gullah culture and talking about preserving that history for future generations.

The parts of Gullah culture that Bell uncovers will prove, as he says, “the idea that black people are not a monolith.” The episode celebrates a version of black culture that differs from other regions of the country, and its premiere on a nationwide news channel will allow a wide audience of people to learn about the important history of the Gullah Geechee people.