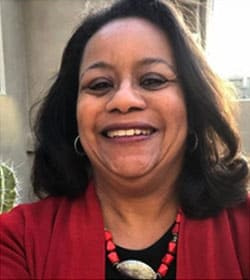 Marie graduated from Fontbonne University (St. Louis, MO) with a degree in English Literature. She spent most of her career in media related positions. Marie worked for KMJM/Majic 108 FM (St. Louis, MO) as a copy writer and traffic announcer. This was followed by a position as Community Affairs Director of KPLR-TV, St. Louis. She then transitioned to municipal government. Marie worked as Deputy Press Secretary for Vincent C. Schoemehl, Jr., Mayor, City of St. Louis, for five years. After life in municipal government, she returned to her roots in media. Marie went back to radio as Community Affairs Director of KMOX News/Talk 1120 (CBS Radio Division).

BFGHS is one of several genealogical societies in which Marie is a member. She began researching her maternal and paternal ancestors in 1997. She planned to assist her maternal uncle in sorting through the history of that branch of the family. With his death, and her father’s terminal diagnosis, she realized that the eldest living members of both sides of her family were disappearing. Instead of being an assistant, she was thrown into the role of family historian. Not knowing where to begin, she sought out experts. As fate would have it, she found and enrolled in a course called “African American Genealogical Research” and she has been “hunting happily” ever since.

As a member and committee chairperson of BFGHS, Marie would like to help the organization grow into a nationally recognized non-profit society that focuses on ethical standards of genealogical research. She believes that to chart your future, you need to know your past. “I hope to assist men and women, particularly African Americans, in connecting with their ancestors. Knowing one’s history helps to flesh out that entity we call family.”

Marie has indicated that one of her major discoveries has been locating her maternal third great grandmother, and her son and daughter, in an 1850 Slave Schedule in Louisiana. They appear as “free people of color” shortly thereafter.